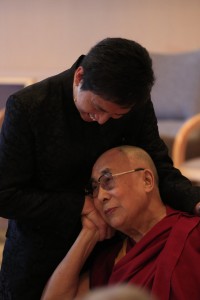 CHADE-MENG TAN (“Meng” for short) recently retired from Google where his official title was “Jolly Good Fellow (which nobody can deny)”, a perk he earned by being one of the their earliest engineers. Among many other things, he helped build Google’s first mobile search service, and headed the team that kept a vigilant eye on Google’s search quality. He has now dedicated himself full-time to promoting Peace, Liberty and Enlightenment.

JOY ON DEMAND is the sequel to his international and New York Times bestseller, Search Inside Yourself, which was based on the highly popular course he designed to help his colleagues at Google reduce stress and increase well-being, heighten focus and creativity, become more optimistic and resilient, build fulﬁlling relationships, and have a few laughs while at it.

Meng is also the Founder and (Jolly Good) President of the Tan Teo Charitable Foundation, a small foundation dedicated to promoting Peace, Liberty and Enlightenment in the world. He is a founder of the Search Inside Yourself Leadership Institute (SIYLI) and a founding patron of Stanford University’s Center for Compassion and Altruism Research and Education (CCARE). He is also a Founding Patron of the World Peace Festival, and adviser to a number of technology start-ups.  Recently, he became the Co-Chair of One Billion Acts of Peace, the campaign that has been nominated seven times for the Nobel Peace Prize.

Meng earned his MS in Computer Science from the University of California at Santa Barbara. He considers himself a Buddhist “on most weekdays, especially Mondays”. He is an avid meditator, because meditation facilitates in him inner peace and happiness “without doing real work”. Meng occasionally finds himself featured on newspapers. He was featured on the front page of the New York Times and delivered a TED talk at the United Nations. He has met three United States Presidents, Obama, Clinton and Carter. The Dalai Lama gave him a hug for his 40th birthday. His personal motto is, “Life is too important to be taken seriously”.

Meng hopes to see every workplace in the world become a drinking fountain for happiness and enlightenment. When Meng grows up, he wants to save the world, and have lots of fun and laughter doing it. He feels if something is no laughing matter, it is probably not worth doing.