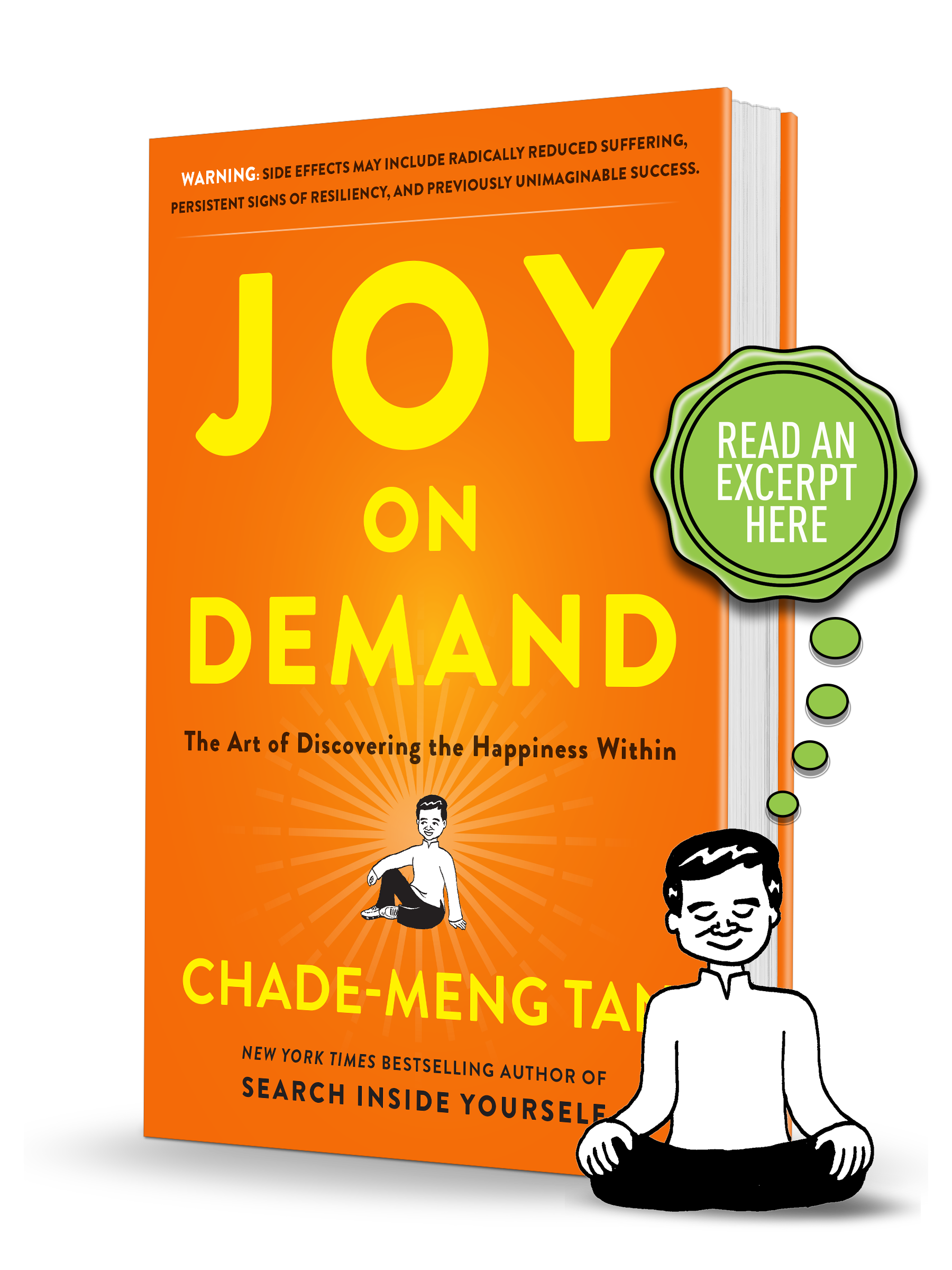 Joy is a sustainable state that fuels our creativity and inspiration for innovation.  It strengthens our ability to attract friends and to get along with people.  Learning to cultivate joy is the fundamental secret to success. In this long-awaited follow-up to the New York Times bestselling Search Inside Yourself,  Chade-Meng Tan shows us how anyone, no matter where they are, can access this source of happiness.

The path to joy on demand is through mindfulness, but it doesn’t have to be a lot of work, take a lot of time, or require you to abandon all your possessions and live in a hut on a remote island. In Joy on Demand,  Chade-Meng Tan reveals the innate contentment that we all possess, and how to tap into this natural, infinite capacity for joy. The best part is that the benefits extend to every aspect of life—our brains work better, our bodies function better, we achieve greater success at work, and we find ourselves highly attractive to the people around us. The more we exercise this skill, the more familiar we become with joy, the more we effortlessly gravitate toward it, and in so doing create a sustainable sense of wonder and contentment that can carry us throughout our entire life. (Holding for applause.) PLUS! The book is packed with cartoons!

Now on the bestsellers lists of
both The New York Times and USA Today!

ORDER YOUR COPY NOW FROM: 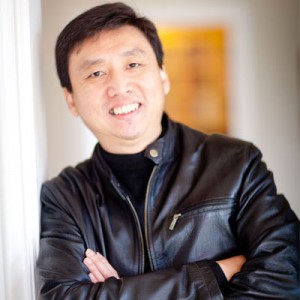 CHADE-MENG TAN (“Meng” for short) recently retired from Google where his official title was “Jolly Good Fellow (which nobody can deny)”, a perk he earned by being one of the their earliest engineers. Among many other things, he helped build Google’s first mobile search service, and headed the team that kept a vigilant eye on Google’s search quality. An avid meditator, he has now dedicated himself to promoting Peace, Liberty, Enlightenment and Happiness.

JOY ON DEMAND is the sequel to his international and New York Times bestseller, Search Inside Yourself, which was based on the highly popular course he designed to help his colleagues at Google reduce stress and increase well-being, heighten focus and creativity, become more optimistic and resilient, build fulfilling relationships, and have a few laughs while at it.  More on Meng

PRAISE FOR "JOY ON DEMAND"

“With Joy on Demand, Meng continues to further his goal of promoting a better life grounded in happiness for his fellow human beings.  I commend his efforts to build a better world with humor, persistence, and meditation.”

39th President of the United States

“We live in a world of constant external stimulation where we are told that material success is the source of our happiness and what we have is never ever enough. In reality, the source for happiness and contentment is within us and can be accessed with one breath. With that, we can experience a natural sense of wonderment and awareness of what is. In Joy on Demand, Meng presents mind-training tools such as these that are free of traditional religious trappings and made accessible for everyone. His contagious humor and his gentle guidance have the potential to deeply impact today’s society.”

“Joy on Demand reminds us that we all have a seed of joy inside of us. This book will tickle that special place in you that will ignite more happiness in your heart.”

“Sometimes the most simple ideas are the hardest to grasp. Using his meditation training, Chade-Meng Tan shows how we can reliably access the vast and transcendent nature of joy and transform it into a sustainable resource that increases the happiness in our everyday lives.”

Author of The Shambhala Principle

“Unlike many books, Joy On Demand delivers on the promise of its title. Let Meng teach you the simple yet powerful skill of meditation — and happiness and success can be a mere breath away. Along with joy, you’ll find calm, clarity, and creativity through discipline of the mind. What do you have to lose?”

Author of To Sell Is Human and Drive

“In this book, Meng helped me to see that joy isn’t just an emotion, but it’s also an action. By tapping into the joy that is deep inside all of us, we gain access to the foundational building blocks of creating a happy life.”

“When a book offers practical, scientific insights on success and happiness, I’m intrigued.  When that book also has cartoons, I’m in.  Meng’s book is a joyful look about where we can find more joy in our lives.”

“A wonderful how-to book on the joys of joy and the way to get there. Chade-Meng, the Jolly Good Fellow at Google for years, takes the reader on a lightning path through his own discovery process through meditation and science on the deep and high value of joy. He should know. He is an engineer, and a very funny one at that. I loved reading his book. It is full of smiles and questions, plus a lot of good science, and even cartoons and stories that make it a very rich read. Everyone will love this book. It is a treasure house of the heart and mind.”

“Chade-Meng seduces you with taking the first step, which is paying attention to one breath. And, if going beyond that is too boring or difficult, do it again. Which means you have now paid attention to the second breath. A Zen Master asked: How long is one lifetime? Answer: A lifetime is the period between two breaths (meaning the first and the last). “Joy On Demand” is a title that is half in humor, but only half. It is a serious introduction to meditation, the more profound for it being so simply explained. I am now on my next breath.”

Chairman of Kerry Logistics and Chancellor of Nalanda University

“A formidable articulation of what it means to cultivate mindfulness in all its dimensionalities, and why it is worth persevering with both effort and effortlessly.  Meng’s logic and clarity are inspiring, infectious, and transformative.”

Founder of MBSR, Author of Full Catastrophe Living and Coming to Our Senses

“Joy on Demand introduces us to a powerful, life-changing idea: No matter where we are in our lives, we all have the ability to access joy. Meng is a wise and entertaining guide, generously sharing his own incredible life story and outlining the practical steps we can all take to actually train ourselves to live life with less stress, more wisdom and more fulfillment.”

“This book DEMANDs your EnJOYment.”

“What caught my attention was Chade-Meng Tan’s confession: ‘I started meditating because I was miserable enough to try anything.’ So, happiness was not something that came naturally to him, it was a skill he had to learn. But he found that the ability to access joy is highly trainable. Joy led him to success and now in turn he shows himself just the kind of trainer you’d hope for: he answers your questions exactly when you are about to ask them as you read along. He is not talking at you, but with you and shows compassion even for the laziest cats among us. Meng is fun to be with and fun to read. Fun, even when he writes about serious concerns. Let’s be honest: What concerns us more seriously than how to be happy? But he knows that it is equally important to also learn working with pain as we train ourselves in the art of joy. Yes, in Joy On Demand Chade-Meng Tan proves to be a brilliantly convincing salesman for the power of joy. Yet, he does more than persuade: through step by step exercises he delivers the goods.”

Co-founder of A Network for Grateful Living

“With Meng’s new book, joy is about to go viral. These simple, delightful instructions make it as easy to experience–and share–as it could possibly be.”

“This wonderful book is fun to read, with cartoons, jokes and banter all along the way. But don’t let Meng’s humor and light-heartedness fool you into thinking his ideas are just funny too. As many who have long practiced meditation can attest, including Meng himself, the instructions given in Joy On Demand can transform your life. Enjoy the book and train your mind! You’ll be happier for it.”

Author of Lovingkindness and Real Happiness

“We humans are privileged to have access to a higher kind of joy than other animals, joy that comes from doing good, being kind, having a sense of humor, creating music, and finding peace of mind. With this book, Meng reminds us that this human joy is the most reliable, lasting, and truly joyful kind, and shows us how to use nothing more (or less) than our own human minds to get it.”

“This is an important book written by a visionary who has become one of the world’s foremost advocates for finding joy at work.  Chade-Meng Tan is a rare breed–someone who understands the research, but can make these ideas practical and useable even in a fast paced world.  His friendly style makes you feel like you’re sitting down for coffee at Google with him right before he teaches his famous mind-training course. Tan has found a way to make meditation and joy the bedrock principles of one of the most successful companies in history by articulating their value through humor and wisdom, and this book will definitely help you find greater joy and success in your work as well.”

Happiness researcher and best-selling author of The Happiness Advantage

“Meng has captured the subject of our search for joy with his usual elegance and humility. With both great respect for the teachers and their wisdom, and simple reductions to the essence of the work, he gives us all a path to follow that is clear and calm. All one must bring is the intention for a more joyful and resilient way to live, and these pages will do the rest!”

Chairman of Juniper Networks and director of 1440 Foundation 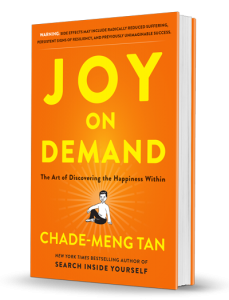 JOY ON DEMAND
just debuted on the bestsellers list of both the New York Times and USA Today!
Order it right NOW from the following booksellers: